Long time no whatever!  I hope that everyone is kicking a bunch of butts-on-bikes out there in the finally-not-winter weather.  Central Iowa has been a veritable wonderland of snowless cycling enjoyment. I’ve personally been able to get into the 200+ miles-per-week range finally, it’s been super rad to get some real miles in!

Quite a few new developments have uh…developed since my last post. I’ve started a new Cyclist Not Biker podcast (episode 1 is up on Anchor.fm now, with other services to follow shortly), in which I plan on talking with some of my favorite cyclists about things like gravel, dirt bagging, ultra events, bike tech stuff, etc. (if you’d like to be on the show, email me).  Episode 1 is a 26 minute solo brain dump from me, mainly focusing on the Unicorn of Dirt Drop Bars, the Ragley Luxy.

I recently acquired this Dirt-Icorn,  one of the rarest and best dirt drops out there, and pontificated for half a podcast about where they might end up.  The post person showed up about 30 minutes later with said handle bars, and they immediately ended up on my refurbished 90’s GT Tachyon. I’ve done two rides on this setup in the last 24 hours, and they are definitely where they belong.  Now it’s time for some bar tape and probably some sort of write up glorifying said bike hahaha.

Some of you may be asking yourself “what in the hell is a Ragley Luxy bar?” Here is an article from good friend and gravel fiend Guitar Ted which explains its origin and extremely short history.  Read it, learn it, live it.  There are nearly impossible to get, requiring years and months of internet scouring to find one available, and when found the price is usually out of control.  I have seen a pair of Luxy’s go for over $200 on eBay. Yeah, oof.

ANYWAY, it’s time to get back out on the bike so let’s wrap this up.  LISTEN TO MY PODCAST. It will be available on Apple, Google Play, Stitcher, and more in the next few days and I will post updated links for you.  Until then you can listen on Anchor. fm

Every year during Memorial Day weekend I have vowed to go ride my bike as far as I can, for as long as I can. This is a tour to push my spring limits, something to gauge what needs to be focused on for summer so that the fall gravel races are a little easier on the body than the early spring excursions.  It could be fully bagged out, it could be a dirt bagging trip, it could be a “credit card” tour with support and hotel rooms.  It could be anything, really, as long as there is a goal of at least 300 miles over the course of the four day weekend.

The fully loaded Ti Vaya, a formidable touring rig but not something to ride 100 miles a day in heavy rain storms. I will not be using this rig for 2017’s GIT

The Good Intentions Tour is just that. It’s a set of intentions (outlined in P1) that are more like a limit than an intention.  Last year I had decided that I was going to take an fifth day and ride a total of 400 miles.  What actually happened was I chose to take my loaded touring bike, I started a day late and rode into intermittent rain storms, at fried chicken, got stuck in a shelter at a city park waiting out a storm, made it to the Night Hawk in Slater, IA drinking with a team of woo girls that were woo-ing their minds out inside a sheet metal shed which houses the back bar at the establishment.  I rode north from Slater to Ames, IA, where I ended up in a hotel room as there were some very serious looking storm systems coming my way, then rode from Ames to middle-of-nowhere Collins, IA where I ran into BikeIowa.com founder Scott Sumpter randomly at a tiny bar, then rode to Cleverley Farms for the last historical Garlicpalooza.  At Larry’s farm we had a blast, but the next morning it was blazingly hot and humid and I made it to a convenience store in Bondurant, IA where I ended up calling a sag for my last 12 miles as I could not get my body to act right.  I don’t blame it, it had a reason to be hostile towards me.  Three Days, 99.4 miles. I couldn’t even bring myself to ride around the steamy block to get to an even 100. I was done. 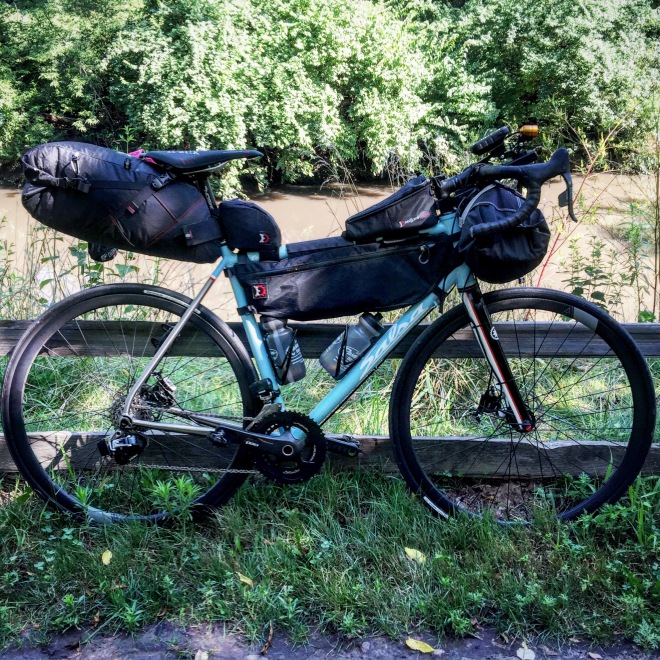 The fully loaded Ti Colossal, a killer self contained road-packing rig. I will be losing most of the bags and using this bad boy for GIT. At least I intend to. haha.

That is how it goes every year, first make a long list of good intentions, then say “fuck it” and just do whatever.  This year I will have a partner in Intentions crime, who has vowed to ride one of the four days with me (sounds like a proper good intention), and will then pilot Kira as my support in my quest to ride at least 300 miles.  I haven’t picked the bike yet, but I can tell you that it will not be my Vaya.  Day 1 or 2 will be on the Java, and since there is support involved this year I will probably just pack a very stripped down Colossal for the solo miles.  I can see this turning into a one day loop then a “tailwind tour” to wherever the time limit takes me.

No matter what happens, I am making my list of good intentions for this coming Memorial Day weekend.  I’m looking at routes, plotting miles, and looking at where I can stick a tandem loop in the middle of all of this, in addition to working in some #vanlife with Kira, and also putting together a bail plan for when I give up on my intentions and just want to go home to my lovely vegan kitchen to eat something other than road food.  That’s going to be the biggest challenge this year, spending 3-4 days on the road while still sticking to clean Vegan eating.  We shall see how that goes, or if anything goes at all.

This is where I stop bitching about the new HyVee store at 4th & Court. At least for the moment. It’s not exactly what we were told they would build for us downtown folk. Ok, got it. They built what they wanted, now we move on and either shop there or not.  I’m choosing to shop there as I have really been wanting a full on grocery store that didn’t require travelling 8-10 miles by bike. Not that there is anything wrong with that, but having the ability to hop on a bike or walk to pick up spur-of-the-moment goods is what we were really missing in the area. They do have a few Vegan prepared food options amongst their vast multi-station food court, just in case I get a little hangry while shopping, and there is a little bike parking out front, making it just a few steps from checkout to packing your bike. Very nice. This is so much easier than shopping by car (which also seems pretty convenient  with the parking garage out back).

Opening day at lunch time was a shit show, to say the least.  It was simply a mission to scope out the selection and strategize my future trips.  I ended up buying a few things for dinner that night, running into a cousin of mine a few times, and being jammed up by customers of the store and every company food/product rep that ever walked the face of the earth seemed to have shown up.  It was jam packed, as expected on the opening day, but it really wasn’t too bad to do a little shopping. I suppose now I know what the aisles will be like when another snowpocalypse hits the city. This first trip softened my opinion of the spot.

Parked out front, loaded up and ready for the mile-ish trip home.

My second trip was pretty casual.  It was early in the morning, and the place was near deserted save for the seemingly massive morning staff and a few other fellow scruffy, unkempt customers. This trip was my first time shopping Vegan at this location, and I was prepared for disappointment.  I was sorely disappointed to that end, as my shopping was easy, the selection of pre-made Vegan items was very good for the size of their grocery section, and the produce section carries everything I was looking for. Not bad, Hy Vee. Not bad at all. The gentleman cashing me out was super rad, the cheese department guy standing close was getting in on the positive vibes, and all was good.

This last trip, my third, was right before lunch.  It was a snowy, cold morning and the place was fairly quiet. I encountered no problems, aside from learning they do not have the Vegan “lunchmeat” I like (probably just need to request it), and they were out of LAVENDAR OIL (working on making my own beard oil), but these are definitely not complaints.  I picked up a bunch of produce, some canned goods for the pantry, and went on my merry snowy way.

The Grocery Getter for Trip 3: The Mukluk w/Chrome XXL Messenger Bag for the groceries

Downtown residents finally have that grocery store we’ve all been wanting.  It’s walkable, bike able, and they have a B-Cycle kiosk out front for when you buy some things that you might want to throw in the basket of a bike and haul somewhere, or even an impromptu bike picnic. It’s a really nice touch. Overall, I feel that the place suits my grocery needs and I will continue shopping there in addition to Gateway Market, New Oriental Market, Jung’s, and La Tapatia. I’m really stoked to have such a solid produce section so close to home, and hell yeah, they have a great liquor and beer selection for when I’m feeling like it’s bag beer time. That still happens from time to time.